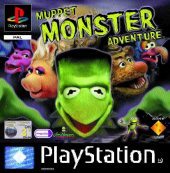 Due to COVID-19, we're unable to accept orders for non-essentials items at this time. Learn more...
While visiting the dreaded Castle Von Honeydew, Robin finds himself fighting to save
his friends as the evil Master of Ceremonies has transformed them into monstrous
versions of themselves! Robin must now explore the world around Castle Von Honeydew, avoiding the traps and pitfalls, and rescue his friends from a terrible fate. Utilising amazing morph abilities gained by collecting amulets, via exploration of the 3D world, Robin must seek and outwit his mutated Muppet friends enabling him to convert them back to their former selves. Robin must then take on the Master of Ceremonies in the ultimate face-off.