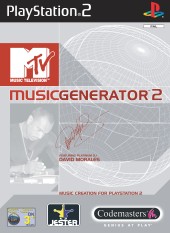 Due to COVID-19, we're unable to accept orders for non-essentials items at this time. Learn more...
Following on from the PSone’s smash hit ‘Music’ and ‘Music 200’ software, ‘MTVMG2’ has taken advantage of the PS2’s enhancements to give music fans a completely enhanced music/video package! With a new user-friendly interface for newcomers and some awesome new audio engineering features for veterans, ‘MTVMG2’ looks set to follow previous ‘Music’ titles as the software of choice for the budding producer. MTV, synonymous with the marriage of the latest music with stunning visuals, loved the series so much they’ve partnered with Codemasters for the latest version.