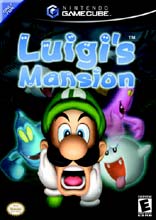 Due to COVID-19, we're unable to accept new orders at this time. Learn more...
Get ready for a frighteningly good time in Luigi's Mansion! With his trusty vacuum but quickly fading courage, Luigi will venture through countless rooms of side-splitting spooks to rescue brother Mario. Watch Luigi creep, cower and cry out in fright as the roaming spirits try to scare him out of his wits!

Luigi’s Mansion is an breathtaking (and heart-stopping!) adventure unlike anything you’ve ever seen on a console. From the brick-walled basement to the gloomy grounds, Luigi’s Mansion is packed with chills, thrills and unending surprises. Luigi’s comic reactions add just the right touch of hilarity to the horrific happenings.

Luigi has won the huge and very mysterious mansion as the grand prize in a big contest. Mario was supposed to meet him there at midnight, but when Luigi shows up his big brother is nowhere to be found. Trembling as he enters, Luigi’s worst fears are confirmed when a giant ghost leaps out of the darkness!

Fortunately, a helpful paranormal researcher provides Luigi with a vacuum cleaner for sucking up ghosts and a “Game Boy Horror,” which includes a 3-D map of the entire mansion and a first-person view from Luigi’s perspective.

As he carefully creeps about the mansion, Luigi will have to find the keys that open the many locked doors. The resident spooks include a young woman primping in front of a mirror, a bawling baby, a couple waltzing in the mansion’s ballroom and a beefy bodybuilder. There’s plenty of coins, cash and gold bars to be vacuumed up, too.

The astounding special effects include transparent ghosts, mirror reflections, spooky shadows, lightning bolts that suddenly illuminate rooms and trails of smoke that Luigi can suck up with his vacuum. Realistic touches include swinging chandeliers, steam from a shower and valentine-shaped hearts within the luminous ghosts.

The all-new GameCube Controller gives pinpoint control over Luigi’s movements. While the Control Stick guides Luigi as he walks, the C Stick turns him left, right, up and down.
Re-released on
May 17th, 2002
Game Platform
Publisher
Nintendo
UPC
45496960018
Product ID
1456532