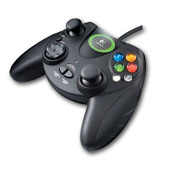 Due to COVID-19, we're unable to accept orders for non-essentials items at this time. Learn more...
Take a standard Xbox® controller with six analog buttons, an eight-way D-pad, two triggers, a pair of analog thumbsticks, Turbo/Auto Fire, and dual vibration feedback motors. Now add a comfortable rubber grip, and Logitech quality. That's what you get from the Logitech® Thunderpad for the Xbox video game console from Microsoft. With our Turbo/AutoFire function, you can fire any action button automatically without having to press the button repeatedly. The result: No more tired fingers as you fire your weapons at an impressive rate. Choose among four different pre-programmed speeds, and you'll be dominating in no time. Features:
Release date NZ
June 23rd, 2003
Game Platform
Publisher
Logitech
UPC
97855019387
Product ID
1460992