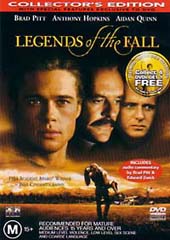 This story is about brotherhood and betrayal between the brothers and looking out for each other and the man who raised them. It is also about the women who mould these men into who they. This is a strong, powerful movie and keeps you captivated to the very end.

Legends Of The Fall – Collector's E­dition

In early 20th-century Montana, Col. William Ludlow (Anthony Hopkins) lives in the wilderness with his sons, Tristan (Brad Pitt), Alfred (Aidan Quinn) and Samuel (Henry Thomas). Eventually, the unconventional but close-knit family encounters tragedy when Samuel is killed in World War I. Tristan and Alfred survive their tours of duty, but, soon after they return home, both men fall for Samuel's gorgeous fiancée, Susannah (Julia Ormond), and their intense rivalry begins to destroy the family.