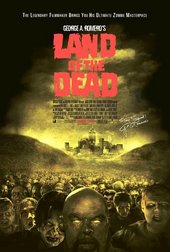 The zombie flick has become lately as popular as the Western in the 1950's, so it made sense to bring the man who created it to exploit its popularity.

The deal is, “Land of the Dead” is a zombie flick alright, but not exactly a horror movie, as Romero's original “Night of the Living Dead”. “Land of the Dead” owes more those post- apocalyptic B-movies from the 70s and 80s -like “The Road Warrior”, “Escape from New York” and “The Omega Man”- than the zombie genre Romero created.

This doesn't mean the movie is not scary. It has its moments. But beneath its high production value it has kind of that campy B-movie feel (per example, the zombies have now a zombie leader, who most times is more funny than scary).

In this times of good zombie flicks like “28 Days Later”, the parody “Shaun of the Dead” and the terrific remake of Romero's “Dawn of the Dead” this movie is kind of redundant. It'll still a treat for a generation who misses the post apocalyptic movies from 25 years ago.

1 out of 1 people found this review helpful.
George A. Romero’s Land of the Dead is the acclaimed director’s long-awaited return to the horror genre he invented. In this new tale, Romero creates a vision of a modern-day world where the walking dead roam an uninhabited wasteland and the living try to lead “normal” lives in a walled city.

A new society has been built by a handful of ruthless opportunists, who live in the towers of a skyscraper, high above the existence on the streets below. But outside the city walls, an army of the dead is evolving. Inside, anarchy is on the rise. With the very survival of the city at stake, a group of hardened mercenaries is called into action to protect the living from an army of the dead.
Re-released on
October 4th, 2006
Movie Format
DVD Region
Edition
Aspect Ratio
Language
English, Hungarian
Length (Minutes)
93
Stars
Studio
Universal Pictures
Subtitles
English, Danish, Finnish, Hebrew, Hungarian, Icelandic, Norwegian, Swedish
Supported Audio
Genre
UPC
5050582368345
Product ID
1512178
Price Condition Seller Details Buy Now
Price
$9.00
+ $3.90 courier