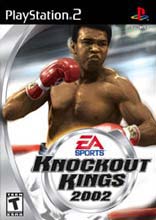 Unavailable
Sorry, this product is not currently available to order
Knockout Kings 2002 features an all new game engine with the fastest, most intense boxing action in the series. Lace on the gloves and experience first-hand the thrills of boxing's biggest moments, most devastating combinations, improved mobility, dazzling footwork, crushing blows and the best looking boxers ever.

A long list of the greatest boxers of all time allows the fight fan to create countless dream bouts with such legendary fighters as Muhammad Ali, Joe Frazier, Roberto Duran, and Sugar Ray Leonard.

Also in the game are the current lions of the sport including Felix Trinidad, Lennox Lewis, Oscar De La Hoya, Bernard Hopkins, Floyd Mayweather Jr., Fernando Vargas, and many others.

Career mode allows the user to build a boxer from scratch with the create-a-player feature. Develop and manage your boxer's career by building up attributes with points earned in the ring, developing a diverse competitor as your opponents will deliver deeper and more varied strategies as you work your way up in rank.

Brand new game: The new engine increases the game's responsiveness and fluidity, boxers now move with the speed and agility of their real life counterparts.

Motion capture technology: Motion capture brings the boxers' movements to life. With the addition of hand animation and motion blending, the boxers have extremely fluid movements, bringing a whole new level of interaction and realism to the ring.

New graphics: the vastly improved boxer polygonal count makes for the most detailed boxers in the history of the franchise. 3D face mapping technology allows EA to record every feature on a boxers face and recreate them in the game.

Soundtrack: New hip-hop soundtrack sets the tone as boxers enter the ring, and new sound effects brings the user out of the stands and into the ring as they hear not only the blows landed by the boxers, but also the cheers and taunts of the crowd.

Create a Player: Allows players to develop a fighter from scratch and bring him up through the ranks in the career mode to unify the belts of the Light-, Middle-, and Heavyweight divisions.

Multiplayer tournament mode: Go head-to-head with up to 8 players vying for the championship belt.

Taunting: Bring on the attitude with unique, boxer specific taunts to let your opponents know how little you respect them in the ring.