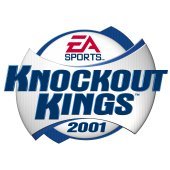 Due to COVID-19, we're unable to accept new orders at this time. Learn more...
The best selling boxing game in the history of the industry is back with a vengeance and ready to defend the title.

Joining the men this year in the game are some of the best female boxers in the world, with their own motion captured movements and fighting style.

Knockout Kings 2001 features a new way to throw blows called Dynamic Punch Control. It allows you to control every punch in a combination, and it helps the boxer create and throw limitless new punch combinations.

A long list of the best known boxers of all time allows the fight fan to create countless dream bouts. It is possible to go toe-to-toe with such legendary fighters as Muhammad Ali, Joe Frazier, Roberto Duran, Marvin Hagler, Rocky Marciano, Joe Louis and Julio Cesar Chavez to name a few.

Also in the game are the current lions of the sport including Lennox Lewis, Floyd Mayweather, Michael Grant and many others.

An enhanced career mode allows the user to train for the big fight. Learn to counter-punch, block, and throw combinations. Rival boxers will stalk you through your career.

New fighting styles (boxer specific) enable fans of the “sweet science” to play as or create a boxer with a fighting style that mimics some of the best know boxers of all time. For example, the “Crab” style can be utilized to fight like Ken Norton, or the “Freestyle” mode made famous by Muhammad Ali can be used. The “Slugger” mode that Rocky Marciano made famous can be a fighting style for those more concerned about offense than defense. Several other modes are available as well.
Release date NZ
December 8th, 2000
Publisher
EA Sports
Product ID
1455557