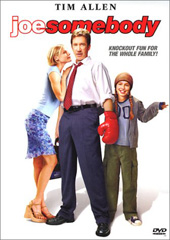 A Comedy About Somebody Everybody Can Believe In.

Funnyman Tim Allen (Galaxy Quest, The Santa Clause) is Joe Scheffer, a mild-mannered single dad who feels overworked and under appreciated at the office. But when the company bully knocks him down in front of his daughter, this Nobody decides he's going to become Joe Somebody – and kick some butt!

Condition
Used - Like New
Used but in perfect mint condition with all original manuals and packaging.
Seller Details
mgfgirl 5 stars Ships from Burnham