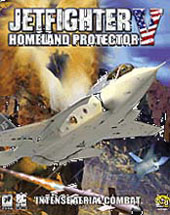 Unavailable
Sorry, this product is not currently available to order
Jetfighter 5 Homeland Protector will pit the player against a mysterious organization bent on total annihilation of the American way of life, attacking with stolen North Korean air and ground forces. Players will Juke and jive their way through over 30 highly detailed and realistic combat missions, in an effort to discover the identity of the shadowy force invading America's south-western coast, while fighting tooth and nail to repel their attacks. A deep, engrossing plot will be unraveled as the player takes the reins of officially licensed Lockheed-Martin Jets, including the legendary F-16 Fighting Falcon , the lethal F-22 Raptor, and the new F-35 Joint Strike Fighter , and makes use of military stalwarts such as the Maverick and Sidewinder missiles. The flyable aircraft will feature authentic sounds and modeling, providing a realistic feel to the action while still being accessible to the amateur fighter jockey. With breathtaking 3D environments using Criterionâ€™s Renderware engine, hundreds of square miles of actual satellite mapped terrain will be used, including the southwestern coast of California and the deserts of Nevada. Fly in and around the Grand Canyon, the skyscrapers of Los Angeles, and the glitz of Las Vegas, battling the enemy forces at every step.