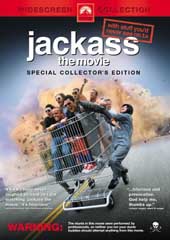 This product is no longer available new.
Available from Marketplace sellers:
Do not attempt this at home.

All the jackasses from the MTV series (Johnny Knoxville, Bam Margera, Chris Pontius, Steve-O, Dave England, Ryan Dunn, Jason "Wee Man" Acuna) are back performing stunts no one would let them pull on television in this feature length movie.