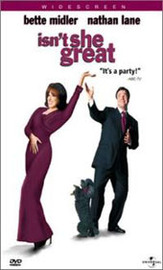 An unsuccessful over-the-top actress becomes a successful over-the-top authoress in this biography of Jacqueline Susann (Bette Midler), the famed writer of “The Valley Of The Dolls” and other trashy novels. Facing a failing career, Susann meets a successful promoter (Nathan Lane) who becomes her husband. After several failures to place her in commercials and a tv quiz show, he hits upon the idea for her to become a writer.

In the pre-60's, her books were looked upon as trash and non-printable. But then the sexual revolution hit and an audience was born for her books. John Cleese co-stars as her flamboyant publisher and David Hyde-Pierce is her initially prim editor that comes to enjoy her exuberance.

Stackard Channing also appears as Susan's best friend. The story shows the hidden behind the scenes story of Susan's life, including her autistic son and her continuing bout with cancer that she hid up to her death. While Midler's natural garishness seems well-fitted for the wild Susann, the story doesn't quite match up with the zeal shown.