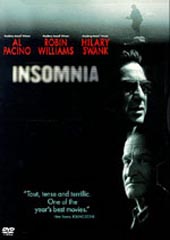 A good Chris Nolan film with a great cast and story. A must see!

Don't close your eyes. Academy Award® winners Al Pacino, Robin Williams and Hilary Swank lead an astounding cast and turn in powerful performances for the riveting psychological thriller from the acclaimed director of Memento. When two LAPD detectives are sent to a remote Alaskan town to aid in the investigation of an alarming teen murder, they find themselves under the glare of the region's perpetual daylight. While closing in on the murderer, veteran officer Will Dormer's (Pacino) partner is killed, and the jaded cop is compromised by the calculated mind games of the primary suspect – a reclusive writer, Walter Finch (Williams). Sleep-deprived and guilt-ridden over his role in his partner's death, Dormer must outmaneuver a brilliantly idealistic local cop (Swank), a brilliantly twisted killer and the brilliance of the Midnight Sun.