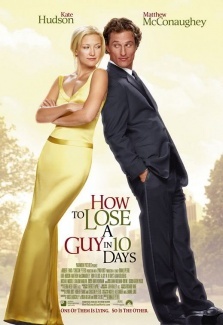 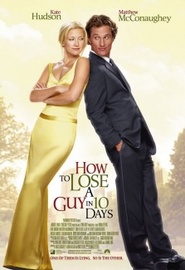 One of them is lying. So is the other…

Oscar nominee Kate Hudson (Almost Famous) and Matthew McConaughey (A Time to Kill) give the battle of the sexes an outrageously unexpected twist in the runaway comedy hit the Daily News applauds as "Hilarious!" As the "How to" columnist for trendy Composure Magazine, Andie Anderson (Hudson) agrees to write a first hand account about what it takes to drive a man out of your life… in exactly 10 days. At the same time, eligible ad agency bachelor Benjamin Barry (McConaughey) accepts a high-stakes bet that he can lure any woman into falling head-over heels in love with him…also in 10 days.

The resulting romantic head-on collision ignites a series of deliriously comic deceptions that prove when it comes to true love… your heart cannot tell a lie. From the director of Miss Congeniality, it's the year's most wildly entertaining romantic romp, in the comedy smash David Shehan of CBS-TV hails as "The ultimate chick-flick for guys!"