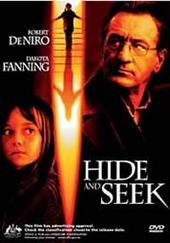 Come out come out whatever you are…

De Niro is David Callaway and Fanning is his nine-year old daughter, Emily. Both are trying to recover from the recent death of their wife/mother, but Emily has begun to deal with the trauma in her own special way she has invented an imaginary friend named Charlie. Nothing unusual about that until Charlie starts to become all too real and Emily begins to do some bizarre and frightening things