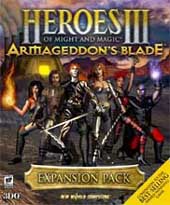 Due to COVID-19, we're unable to accept orders for non-essentials items at this time. Learn more...
In the demon kingdom of Eeofol, Lucifer Kreegan has a vision to set the world on fire by constructing "Armageddon's Blade". Seeking to dethrone this insane king, Catherine invades. However, her generals report the appearance of the fiery Phoenix and mysterious elemental Confluxes. As Catherine contemplates her next move, she wonders... do these omens foretell of Erathia's victory... or the world's destruction?

Expanded Gameplay:
6 new campaigns and over 35 stand-alone missions will propel your Heroes into challenging strategic battles, and the elemental Conflux town adds a new mystical environment to the Heroes of Might and Magic III universe.

Game Editor:
Create your own unique battles with a fully functional campaign and improved map editor that ensures quick and easy customization for infinite replayability.