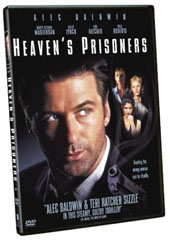 Due to COVID-19, we're unable to accept orders for non-essentials items at this time. Learn more...
Based on James Lee Burke's best-selling novel, Heaven's Prisoners follwos the life of ex-New Orleans cop Dave Robicheaux (Alec Baldwin). Robicheaux has turned in his detective's badge, almost won his battle against alcoholism and has left the city with his wofe Annie (Kelly Lynch) for the tranquility of Louisiana. His life is turned upside down when a place full of illegal immigrants crashed into a nearby gulf. After risking his life to save a sole survivor - a little girl - his life is threatened when he attempts to clearup the mystery surrounding the crash. A trail of murder and deception follows which puts Robicheaux into a situation far worse than the one he has left behind. Special Features:
Release date NZ
October 24th, 2003
Movie Format
DVD Region
Edition
Aspect Ratio
Character
Director
Phil Joanou
Language
English
Length (Minutes)
127
Stars
Studio
Vendetta
Subtitles
None
Supported Audio
Original Release Year
1995
Product ID
1460985