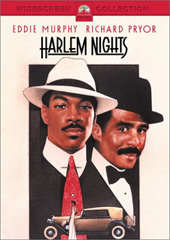 They're up to something big.

Three generations of comedy legends star in this tale of nightclub owner Sugar Ray (Richard Pryor) and his son Quick (Eddie Murphy), who fight to keep a vicious mobster and a corrupt police force from putting them out of business. Written and directed by Murphy with an all-star supporting cast including Red Foxx, Della Reese, Arsenio Hall, Jasmine Guy and Danny Aiello, Harlem Nights is an action-packed comedy treasure.