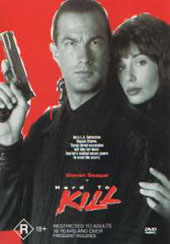 A corrupt California politician and his hitmen have gunned down Los Angeles detective Mason Storm (Steven Seagal) and left him for r dead. But they'll find out the hard way. Storm is Hard to Kill. For seven years, Storm's been in a coma-care unit.

Now he's awake with one goal? Revenge. Aided by a devoted nurse (Kelly Le Brock), he retrains to unleash his monumental marial-arts skills with full fury. Hard to Kill is hard-to-beat excitement.