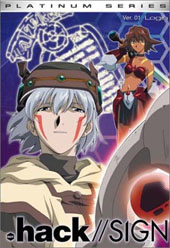 This product is no longer available new.
Available from Marketplace sellers:
In the year 2005, a computer virus called "Pluto Kiss" destroys the networks of computers all around the world, subjecting the cyberspace to severe restrictions. Two years later, as free access to the networks recovers, people are now crazed over a full-immersion virtual gaming environment called "The World." However, when reality and virtual reality collide, a whole new adventure unfolds as a mysterious accident leaves Wave Master Tsukasa permanently logged in. Now a group of ciphers must figure out the truth behind Tsukasa while a rash of mysterious game-related incidents in the real world begins to draw the attention of even the most powerful players within the game. Contains Episodes 1-5 Special Features:
Release date NZ
January 1st, 2007
Movie Format
DVD Region
Edition
Brand
Aspect Ratio
Language
English, Japanese
Length (Minutes)
125
Studio
Madman
Supported Audio
Genre
UPC
9322225017351
Product ID
1460937