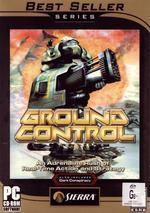 Unavailable
Sorry, this product is not currently available to order
Two political factions have gone to war over a distant world and the secrets it holds in Ground Control, a visually stunning and frenetically paced action/real-time strategy game from Sierra Studios and Massive Entertainment. At its core, Ground Control is a frenetically paced RTS played out in a visually stunning 3D world. During the course of the game, players will be challenged in an intense arena of battle- effectively managing tactical squads of foot soldiers, mobile units, air craft and support units as they vie for control of a distant planet. In addition to the epic single-player game, Ground Control's extensive multiplayer component will feature several unique multiplayer modes including deathmatch-style drop-in games - a first for RTS.