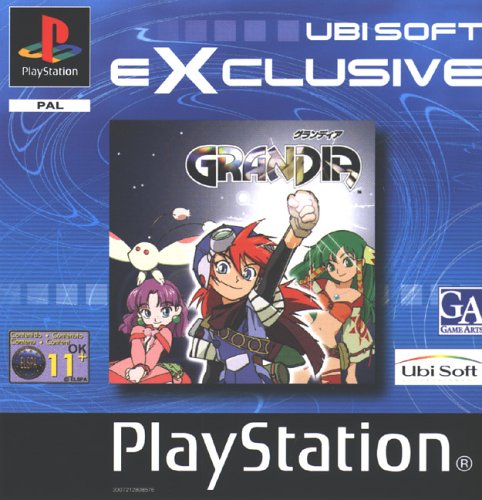 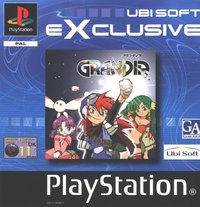 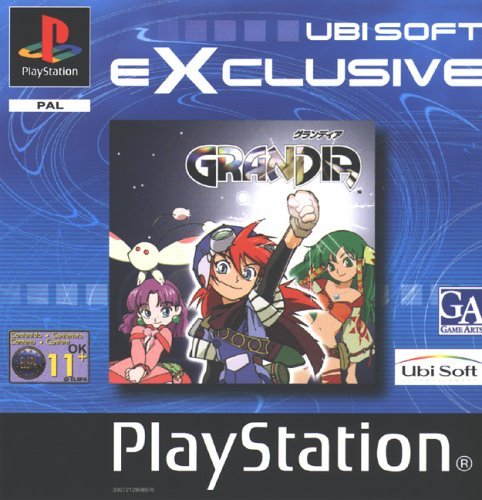 Great graphics, fluent fighting style… go play Final Fantasy X. Seriously the graphics in this game don't even make it to 1, maybe 0.5, its basically like looking a a moving drawing.

Though netherless it is still one of my favourite games of all times!!

The story line is really fantastic. Justin wants to be an adventurer like his dad, and his dad and so on. So you must make that dream come true. Justin and his friends Sue, come across a woman called Alete in some old ruins at the start of the game. Alete notes that Justin holds the spirit stone (A momentum his dad gave him), and that he must find the anciet city of Alent, and thus his journy begins!

Now this game is seriously long, I mean really long, I've had it since I was 7 and I still haven't finished it.........I'ts not that i'm bad or anything…I just didn't get when I was 7 and abandoned it for 5 years!!! I can't give enough praise for Granida's story line, I just love it so much, it keeps you captivated the whole way through, even thought its so long.

The fighting is the annoying RPG turn based stuff, where a bullet can only hurt you a little but a whak with a whip can kill you, but hey there's lots of spell and moves to learn and they are really easy to work out which ones you need to get, because basically its all written out for you

This game may seem a little primitive from some of you, but I still love it! It is such a classic, you can't call your self an RPG gamer without playing this game!

Got this about 1999-ish and is one of my most memorable gaming experiences. Backed up by descent english dubbing (a true rarity). The sequel was also great (though losing a lot from the superb DC version). A crying shame how grandia xtreme did not get a local release :(

Get this game if you have not got it already and play the game that Japanese Saturners swore was evert bit as good as Final Fantasy 7.

I got this game about 6 years ago or something and to this day it remains one of my most treasured gaming experiences. The fighting system itself is enough to keep you going throughout the whole game. The music is awsome, the characters are memorable and all have a reason for being in the story, although the voice acting is a bit weak, and you will tire from hearing the same victory shout from the individual characters (which ever one delivers the finishing blow, usually has a line or two to say in celebration). The use of 3D settings with 2D characters works wonders. The fact that you can see your enemys coming and can avoid them adds another element of stratigy to the game. If you like final fantasy (as I do), you will definately like this game, highly recommended.

Note that although Grandia is a PlayStation game, it will work on the PlayStation 2 console.

A rare RPG classic! RPG fans will welcome Grandia's imaginative, vibrant and detailed gameplay, which is complemented by a strong character-driven story, set in a warm and inviting world.

Developed by Game Arts, the producers of Alisa Dragoon and the Lunar series, Grandia is an RPG masterpiece, loaded with innovative gameplay features and scenarios that will captivate players, providing for more than 70 hours of gameplay.

Grandia is an extraordinary story that pits magic and technology against the feral guise of corruption. Long ago, before humans could claim their superiority upon this world, a benevolent race, with great knowledge and powers, lived in peace and harmony. As the world evolved, humans began to establish their roots in these lands and people began to believe that the existence of the magical city of Angelou was nothing but a myth. But the sinister General Baal knows otherwise and scours the world in hopes to find the ancient capital of Alent and unleash its secrets.

Embark on an unforgettable journey as you assume the role of Justin, a precocious 15-year old boy, as the adventure begins you uncover what happened to the ancient world and try to stop General Baal from awakening a deadly secret. Key features: Up to four characters to occupy your party in exploration and battle, inviting and vibrant worlds each with their own architectural style, a field radar view provides an overhead perspective for easier exploration and item location, over 200 enemies to battle, real-time battles where you are challenged with strategically planning out attacks, distance, spells, placement and orders; all four characters can also attack simultaneously. Grandia has an impressive system of magic and character development that will captivate you for hours! Over 200 weapons, over 200 items to collect, and over 80 spells and attack techniques.
Release date NZ
March 24th, 2005
Game Platform
Developer
Game Arts
Publisher
Ubisoft
UPC
3307212808576
Product ID
1513878