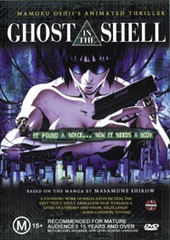 In “Ghost in the Shell,” a special team of police officers oversee crimes connected to computer espionage and other intelligence matters. The Major, our heroine, is made mostly of machine parts (she’s a bit like Robocop, her brain and her mental identity keeping alive by being housed in a “shell”). As weird events begin to happen in Tokyo, The Major uncovers a secret government project that has caused a computer program/virus to become “self-aware.” The self-aware computer identity wants to find its own “shell,” to be able to move about freely and to join the physical world of humans. Video: The 1.85:1 anamorphic widescreen image looks very good, although it’s a bit on the soft side. I’m not saying that things look fuzzy or hazy. Rather, objects don’t look as sharply defined as you’d expect with an animated feature created partially on computers. Then again, as the characters are often illuminated by the computer monitors that THEY are using, perhaps the “softness” of the image is just an artistic result. Colors look stable and clean. Although a lot of the action is set in the dark, nothing ever becomes murky to the point of indistinguisha­bility. Audio: The “Ghost in the Shell” DVD comes with two audio options: a Dolby Digital 5.1 English dub and the original DD 2.0 stereo Japanese track. The English dub is an excellent dub job. The actors convey the characters’ emotions capably, and the sound field is fairly enveloping (though not aggressively active and directional like the “Macross Plus” dubs). The 5.1’s LFE (low level effects), especially during music-only moments, enhance the moody atmosphere of the narrative. Final Thoughts: All in all this is an excellent movie and the Dvd itself is excellent. Worth every penny!

IT FOUND A VOICE... NOW IT NEEDS A BODY In a world caught in the grip of information overload, where artificial intelligence is more than the real thing and cyborg cops spend their lives surfing on an electronic sea of living data, only the Ghost - the indefinable element of human consciousness - exists to determine who is alive and who is purely a creation of the net. Major Motoko Kusanagi is an elite officer in the Section 9 security force: a cybernetic agent so heavily modified that little more than her Ghost remains. Along with fellow cyborg Bateau and the mostly human Togusa, Kusanagi is set on the trail of a computer-criminal known as the Puppet Master, a data thief skilled enough to hack into the very minds of his victims. His human marionettes live out existences that are nothing more than computer generated fantasy, unwittingly committing their master's crimes while the Ghost-hacker hides in the darkness. But as Kusanagi digs deeper into the walls of secrecy surrounding the case, it appears that the Puppet Master has a special interest in her alone. And when the Ministry of Foreign Affairs, shadowy Section 6, enter the scene, Kusanagi becomes tangled in a web of plot and counterplot, and realizes the true identity of her invisible assailant lies at the center of a vast and lethal political conspiracy... DVD FEATURES:
Release date NZ
January 1st, 2002
Movie Format
DVD Region
Edition
Aspect Ratio
Director
Mamoru Oshii
Language
English, Japanese
Length (Minutes)
82
Studio
Madman
Subtitles
English
Supported Audio
Genre
Original Release Year
1986
UPC
9319017050009
Product ID
1460096