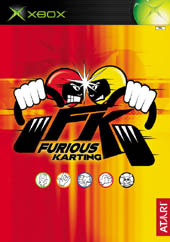 Due to COVID-19, we're unable to accept orders for non-essentials items at this time. Learn more...
Players will assume the persona of one of eight uber-contemporary racers with varying nationalities as they speed through a wide variety of racing locales that include indoor stadiums, classic outdoor tracks and extreme fantasy courses that defy conventional laws of physics. Up to 11 opposing go-karts will be competing at once, each featuring fully animated and hyper-aggressive adversaries as well as intricately rendered vehicles.