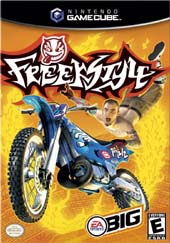 Due to COVID-19, we're unable to accept orders for non-essentials items at this time. Learn more...
Picture flying through rugged terrain with massive jumps at more than 70 mph, hitting a 40' jump at the ledge of a 200' cliff and pulling off a Superman Seat grab, a Saran-wrap and 360 all before you land. Incomplete stunts will cause the rider to crash and waste valuable time and points.

It is not just about coming in first. It's not about being the fastest. With EA SPORTS BIG Freekstyle, it is all about being fearless. Take a good look at the freaks you are competing against. Go head-to-head and see if you have what it takes to ride with the best on the PlayStation 2 computer entertainment system.

A unique cast of characters includes from the freestyle motocross world Mad Mike Jones, Metz and Deegan. Even the former Miss Supercross and TV host Leeann Tweeden saddles up turns into a throttle junkie.

Choose from any of eight different riders with their own unique attitude and style including freestyle sensations Mike Metzger, leader of the Metal Mulissha, Brian Deegan, Stefy Bau, Clifford "The Flyin' Hawaiian" Adpptante, Jessica Patterson and Greg 'Albee' Albertyn. Each character has their own unique personality, bikes and outfits.

Nine different venues will challenge riders to take on some of the most outrageous freestyle terrain on tracks such as Rocket Garden, Crash Pad II, Monumental Motoplex and the ultimate big air course, Big Sky. Hidden paths and shortcuts challenge gamers and add to excitement while special Freekstyle worlds will allow gamers to take the bikes anywhere they have the guts to go.

Over 80 tricks to pull off or combine for bonus points and boost include, the McMetz, Saran wrap, superman seat grab, the roll, the helicopter and the 360 to name a few. An all new scoring system will challenge even the most fearless dirt demon to hold that Lazy Boy for just one more second.

The richly detailed environments are inspired by the sport and embrace the lifestyle of extreme motoX riding. Gone are the barriers and constraints of licensed tracks and venues. Behold the EA Sports BIG worlds of Freekstyle.

Feel the wipeouts and the rugged riding environments with the Sony Analogue Dualshock.
Topped off with an emotionally charged soundtrack that will bring forth the dare devil in anyone who picks up the controls.