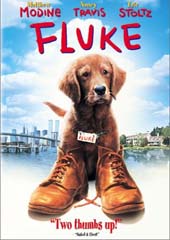 Unleash your imagination… and come along on a magical journey. Follow him home.

Unleash your imagination and prepare for the adventure of a lifetime with Fluke! Starring Matthew Modine, Nancy Travis, Eric Stoltz, Max Pomeranc and canine heroes Comet and Barney, this heart-warming fantasy tale delivers laughter, suspense and marvellous adventure for the whole family. Waking up on his very first morning, Fluke – a newborn puppy – discovers a wondrous world of excitement and fun.

Whether romping and wrestling with his brothers and sisters or curling up by his mother for a nap, Fluke is as contented as any young pooch can be. But when recurring dreams and a series of mishaps trigger memories of a very different world, he slowly realises that he once had a very different life – as a man! Convinced of his previous identity, Fluke sets out on an extraordinary journey that leads him back to his human family… and shows him more through the eyes of a dog than he could see as a man.