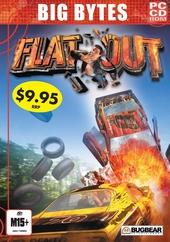 I bought this ages ago, and I really enjoyed it. As the other reviewer said, it's a great game! The only niggle I have is that you can only own one car at any one time. I would have to say this is a better all-round game than Flatout 2, which although it has nicer graphics and few other things that this doesn't, this is a classic and definitely worth getting. Very replayable.

most $9 games really aren't worth it. this is one of them that actually is. I had the demo and finaly got around to buying it, great gameplay, excelent physics, and incorporates them almost as much as Half life 2 (either avoid obstacles, or crash and get pity-Nos). The game finaly leaves the overly arcade style of the Need for speed series , but dosen't imbrace the lack of playability present in most hard out rally games. Its still easy to play, and very quick to get into. has a very ‘dukes of hazzard’ feel, despite the game apparently being set in europe. lots of fun, and you can run into and break almost anything. Oh yeah, and the graphics are still pretty damn good for today.

Experience the drive of your life in Flat Out. Throw yourself around 36 challenging tracks in one of 16 fully upgradeable cars.

The track environment is subject to an advanced physics system unique to this game, and is set to define a new standard in racing games. Fences will shatter, tyre walls will explode, water tanks and barrels will fly across the track into other cars and with 40 deformable pieces on every car, sparks are quaranteed to fly. With an extensive championship mode and huge variety of races this game will keep you "Flat Out" for months.