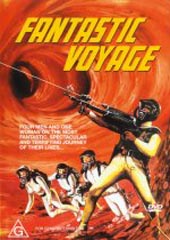 For the year it was made Fantastic Voyage was a milestone in movie making,from its beginning to end this motion picture took 20th Century Fox almost 2 years to complete from early preproduction to completion of the lavish special effects which even today are a marvel to watch for their time,the performances are strong for all the cast and the movie very rarely lets.It is interesting to note that director Roland Emmerich i.e "The Day After Tomorrow,Inde­pendence Day, is to helm the remake due to begin filming early in 2010,one can only imagine how dazzeling 21st computer generated effects will look on todays big screens.Add this movie to your collection and watch it on all its glory on a widescreen television,it will not dissapoint.