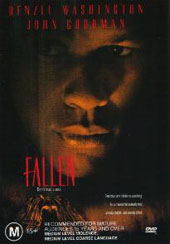 Homicide detective John Hobbes pursues a killer down a bustling sidewalk. There she is: a small, middle-aged woman. No, wait: the killer is the timid man beside her. Now it's someone else. It's all and none of them. Because the murderer Hobbes seeks is a demon passing from one human host to another with a brush of an overcoat or touch of a hand.