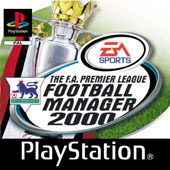 Due to COVID-19, we're unable to accept orders for non-essentials items at this time. Learn more...
PREMIER LEAGUE, BUNDESLIGA and LNF LICENSES
The only football management game to contain the official licenses of England, Germany and France - the only game to feature the real teams, players, kits and stadiums. There is no other game that can present the atmosphere that makes these leagues the focus of fanatical support from their fans.

NEW 3D MATCH ENGINE WITH HOT-KEYS
Watch your team play using the STARS game graphics. If you don't like the way your squad are playing use hot keys to adapt your team on the fly, or you can go into depth from the menus - why manage a spreadsheet when you can manage from the sideline. Consumer Benefit: Teams are no longer out of your hands once the game is started. Act like a real manager and issue commands while the game is in full flow. The next level of control and power.

BUDGET BASED FINANCIAL SYSTEMS:
Budget based financial model - the clubs chairman requests that the user provides a budget to set the clubs spending, this budget must be adhered to or your job is in jeopardy. Managerial performance in maintaining these budgets affects the success of the club and the chairman's attitude towards spending, allowing you more cash in future seasons so the team can grow. Consumer Benefit: Real to life financial model and consequences.

EXTENDED TEAM AND PLAYER OPTIONS:
Combine picking the correct squad with youth team development, managing your reserve team matches, training and the hiring and firing of players and new coaching staff, scouts, doctors and grounds-man. Their success benefits the team in distinct areas. Their failure becomes your fault and expense. Consumer Benefit: Greater variety of management needed from the player. Not only squad management is required by careful selection of the right support personnel for your team success. Note: All hiring and man management options can be automated.

MULTIPLAYER MODE:
New multi-player options, featuring "hot-seat" multi-player with up to 8 players playing on one machine or up to 16 players over LAN connection. Consumer benefit: The game becomes social and brainpower is added to the equation - making for a more challenging and entertaining experience.

EXTENSIVE DATABASE
23 divisions from 7 countries. Over 30,000 players to buy and sell. All leagues operate concurrently with yours and feed results back to you. Consumer benefit: Suspends the belief of a living virtual world. Live dreams of managing exotic clubs on the continent. Feel the glory of European tournament triumphs. Amaze your friends with tales of how Barcelona poached you for a high profile management job after taking Arsenal to the Premier League championship 2 years in a row.
Release date NZ
October 6th, 1999
Brand
Publisher
EA Sports
Product ID
1454866