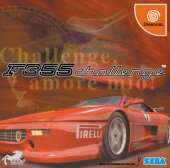 Due to COVID-19, we're unable to accept new orders at this time. Learn more...
Included in the game will be an exact port of the arcade game, without the other two monitors, of course, as well as several additional modes that enhance the original arcade game. Five additional modes of play will ship with the Dreamcast version of F355 Challenge when it is released later this year, as well as several other options designed to take advantage of the console's Internet capabilities.

F355 Challenge's graphics are easily the nicest we've seen on the Dreamcast and easily better than any racing game released to date. The most impressive aspect about the graphics engine is the sheer amount of detail allowed for each track and its surroundings. None of the six tracks - Motegi, Suzuka, Suzuka short, Monza, Sugo, and Long Beach - have looked nearly as good in any other game as they do in F355 Challenge. Everything from the skyscrapers surrounding the Long Beach track to the amusement park that borders Suzuka is rendered cleanly and with only a minimum amount of sprites. The ground textures, as well as those that skin each car and the outlying areas of the track, are clean, crisp, and they lack any fuzziness whatsoever. Even the Pirelli and Shell logos on the side of your F355 Challenge car are easily recognizable. The sky is also impressive, and, as an added feature, it's randomly generated to display one of a number of different weather patterns that range from cloudless days to gray and stormy horizons.

Like the graphics, the sound and music are a carbon copy of the arcade's. The engine noise is loud, but certainly not annoying, and it reverberates with the same F355 growl that manages to be throaty and hollow at the same time. The game's music can best be described as a mix of '80s Van Halen-like pop-metal with English-language J-pop. It might seem a bit campy to some, but for what's it worth, we noticed a small improvement in our lap times with the music on. Go figure. Regardless, these tunes can be turned on and off on the fly to suit your mood.
Release date NZ
August 17th, 2000
Publisher
Sega
Product ID
1455637