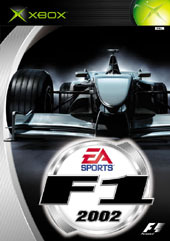 Due to COVID-19, we're unable to accept new orders at this time. Learn more...
EA SPORTS F1 2002 will be the first product on ANY platform to include the complete 2002 FIA Formula One World Championship giving the console gamer the opportunity to compete head to head with all the new drivers and teams as the season unfolds. EA SPORTS F1 2002 will be the first video game to feature the all new Toyota Formula One team – the 12th team to enter the F1 paddock.

Incredibly competitive artificial intelligence will lead to the player racing against opponents who want to win as badly as they do. Every driver on the track will fight, battle and react to maintain their current position, while constantly looking for the next opportunity to overtake, creating a high pressure, edge of the seat racing experience.
Release date NZ
July 12th, 2002
Game Platform
Publisher
EA Sports
Product ID
1456509