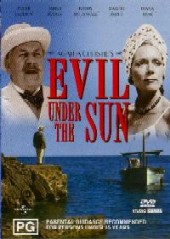 Unavailable
Sorry, this product is not currently available to order
Hercule Poirot is called in to investigate a case for an insurance company regarding firstly a dead woman's body found on a moor and then a important diamond sent to the company to be insured turns out to be a fake. Poirot discovers that the diamond was bought for Arlena Marshall by Sir Horace Platt and Arlena is on her honeymoon with her husband and step-daughter on a tropical island hotel. He joins them on the island and finds that everybody else starts to hate Arlena for different reasons - refusing to do a stage show, stopping a book, and for having an open affair with Patrick Redfern, another guest, in full view of his shy wife. So it's only a matter of time before Arlena turns up dead, strangled and Poirot must find out who it is…