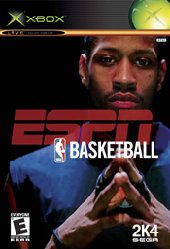 Due to COVID-19, we're unable to accept orders for non-essentials items at this time. Learn more...
Go ahead - leave behind the old traditional style of game. You know, the one of uncontested lay-ups and simple chest-to-chest passes thats been around for the last few years! Welcome to a new kind of hardwood. Turn on the skills of the next generation and experience the new NBA attitude with NBA 2K4. Start with fanatical crowds, blinding lights and deafening sounds that set the stage for each competitive match-up! Heart pounding and filling with anxiety, it's now time for you to step on the court with a let's play swagger! You got game, so rise above the rest and throw down rim rattling slams, dish spine-chilling passes and be a part of the athletic explosion that now flows through the game! Feel the passion that pulls at every muscle, yell, tear and fist pump as you find yourself in the next level of competition where it takes attitude, desire and heart to win championships! It's a new year, a new game and a new attitude -- It's NBA 2K4!

ESPN Presentation - Step up and join the most anticipated presentation known to date! With detailed visuals, picture-in-picture introductions, a variety of eye-catching callouts and new studio and color commentary -- why settle for anything less!

Total Game Control - Incredible dribble moves, stellar passing control, split second defensive reactions -- all at your fingertips as you control every aspect of your NBA game on both sides of the court!

Intuitive Showtime Pass Mechanics - Your game, your show! Conquer every defense with a variety of jaw dropping no-look and behind-the-back passes, setting up monstrous finishes around the rim!

Smooth Animations - Unbelievably natural and dynamic, every animated motion such as gravity defining dunks, ball-handling wizardry and even the movement of player shorts are precisely accurate to real-life NBA competition!

Smart Camera Intelligence - Innovative, new picture angles based on ESPN's broadcast cameras will tightly follow all of the NBA action, offering the perfect viewing perspective of every play!

Multi-Player Franchise Mode - Take your game and the league to the next level as you suit up your five and take on 29 other franchise players in the most competitive season you'll play'yours!