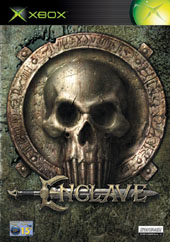 Due to COVID-19, we're unable to accept orders for non-essentials items at this time. Learn more...
In the fantasy world of Enclave the people of Light and Darkness are divided by a bottomless rift that split the earth many millennia ago. The lands of light are prosperous and rich, an Enclave of truth and order, surrounded by the twisted and barren lands of the dark, war ravaged plains known as the Outlands.

Over the centuries the rift has started to close, skirmishes along the border have become more and more frequent and it is only a matter of time before these altercations turn into a full scale war. Take the side of light or dark as they prepare for the imminent war.

Through its sheer beauty, fascinating storyline and convincing gameplay Enclave will lastingly embed the players in its gloomy, medieval-fantasy scenario.

Presenting a truly flexible and extensive game system, where the players can indulge in thrilling struggles for survival, Enclave will impressively show its owners why the Xbox is termed a "next-generation" console…