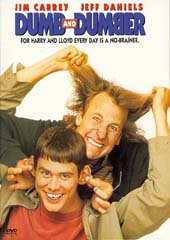 For these guys every day is a no-brainer.

In what can only be described as the dumbest film of all time, Jim Carrey and Jeff Daniels, star as a pathetic pair of dimwits who embark on a cross-country road trip to return a briefcase full of cash to its rightful owner. For Lloyd Christmas and Harry Dunne, everyday is a no brainer as they baffle cops, kidnappers, truckies and anyone else who is unlucky enough to cross their paths.