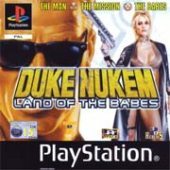 Due to COVID-19, we're unable to accept new orders at this time. Learn more...
Restricted to persons who have attained the age of 16 years of age and over.

In the future an alien race has eliminated the entire male population of earth and enslaved the few remaining women. However, some women managed to escape, and united to form the Unified Babe Resistance (UBR). Using a time portal device, the UBR tracked down Duke and made his choice very simple, help them now or there would be no chicks in the future. Being the chivalrous hero that he is, Duke promptly signs up to help the babes.

* Use a huge new arsenal of weapons like Blasters, Flamers, RPGs, Grenade Launchers and more.