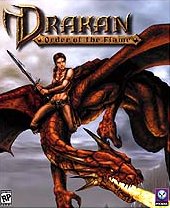 Unavailable
Sorry, this product is not currently available to order
Drakan: Order of the Flame is a 3D action game played from a 3rd-person perspective. Gameplay focuses on the adventures of a beautiful young heroine and her teammate, an ancient and powerful dragon. You'll journey through 10 mission in 4 worlds.
This is Drakan Order of the Flame. As the player, you are Rynn, a warrior- heroine with a savvy attitude and a quick sword arm who teams up with a powerful, fire-breathing dragon named Arokh. Leaving her small village behind, Rynn and Arokh embark on an epic journey across the massive and dangerous world of Drakan in a desperate quest to save Rynn's kidnapped younger brother - and quite possibly all of Drakan - from a fate worse than death.
Played in third-person perspective, Drakan combines hand-to-hand combat using over 50 different weapons with a unique flight engine that allows you to battle it out against other dragons for supremacy of the skies. Six different dragon attacks and seven magical spells round out your arsenal. In addition to blood curdling battle situations, Rynn and Arokh will explore their mysterious world, solve puzzles, and interact with more than 25 unique characters through Drakan's real-time, in-game cinematic system.

Finally, the game also features Internet and LAN support where up to eight players engage in non-stop, head-to-head combat on the ground in the skies high above Drakan.

The Story
In the earliest known days, the world of Drakan was a place of chaos and strife. The many tribes and races were scattered, and warred amongst one another in an endless cycle of death and retribution. The two greatest races, the elder breed of Dragons and the younger tribes of Humanity, struggled bitterly against one another wherever they met. Where mankind encroached on the nesting grounds of Dragons, the great beasts razed their villages and scorched their crops, while stealthy bands of men would trap and kill lone Dragons, and enter their lairs to destroy the precious clutches of eggs.

Across the world, this madness raged for centuries, until at last, one small bastion of reason shone forth. High in the central mountains of the great continent, one lone tribe of men found an uneasy compromise with the neighboring Dragons, and each allowed the other to live unmolested. In time, a common trust developed, and the two races began to cooperate more fully. The strength of this alliance gradually spread to the neighboring regions, and the seeds of the first great civilization were sown. As a symbol of the greatest virtues of this society, the two races agreed upon the pact known as The Bond. Through the magic of an artifact known as the Dragonstone, the bravest and most noble of men would join their life essence to that of a single dragon, linking the two forever as one. These Bonded formed a loose alliance known as the Order of the Flame, serving as roaming protectors and arbitrators, and embodying the ideals of brotherhood and cooperation upon which their society was built.

Led by the gleaming example of the Bonded, the Order of the Flame rapidly spread its influence and philosophy throughout the continent, gathering the warring races and petty kingdoms into a single great nation. For generations, this peace held. Freed from the constant threat of warfare, their scholars turned to the study of magic, devising potent spells to alter the very land around them and mold it to their needs. Nothing, it seemed, was unattainable.

Still, there remained those few whose desire for individual power could never be satisfied in a society of equals. Secret societies and subversive groups began to appear, gradually building an invisible network of those opposed to the Order. The most powerful, and most secretive, of these groups would come to be known as the Dark Union, an alliance of the strongest and most influential of the Order's foes.

At last, it was a man named Narvros who would bring about the end of this golden age. A War Mage of tremendous power, and a highly celebrated member of the Order, Narvros was in truth a member of the Dark Union's inner council. Under Narvros' direction, the Dark Union's agents had been exploring vile experiments in genetics and forbidden magic, deep in the trackless wildlands of the eastern frontier. The discoveries made in these desolate lands were kept secret from the world, until at last Narvros felt the time was right. A meeting of the inner council was convened, and Narvros, through quick and bloody decision, crowned himself as supreme leader of the Dark Union. Immediately, he set into motion his plan for the downfall of the Order of the Flame. Mounting his ancient dragon, Kaeros, he delivered instructions to each of his lieutenants, then disappeared into the eastern waste, not to be seen again for another ten years.

Narvros' brothers within the Order, unaware of his true nature, had mourned his disappearance, and many had searched for him in vain. It was with great joy that he was welcomed, when, after ten years, he appeared on the steps of the great Dragon Temple in the capitol of Drakan. A meeting of the local Order was hurriedly called, so that all could hear his story and welcome his return. Narvros stood silently until the last of his brothers was seated. Then, with a grim smile, he uttered a Word of Power not spoken in over six hundred years, and destruction ripped through the hall.

Outside, a dense fog had risen, blanketing the streets in a dismal mist. Blinding flashes of light rippled across the city, and streams of dark, hulking shapes poured from the alleys, laying about them with blood-clotted axes and great butcher's blades. Within minutes, the streets were choked with smoke, and the air resounded with the screams of the dying and the bestial roars of Narvros' monstrous servants. By nightfall, the city was in ruins, and the brightest minds of the Order of the Flame lay sealed in the smoldering rubble of the Dragon Temple.