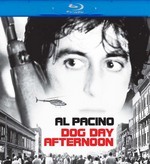 All Pacino movies have an edge and this one was no different. Based on a true story the plot weaves making you wonder what will happen next. It's also funny to look at the 70's outfits and cars. Although I found the ending slightly disappointing, it did seem to tie in nicely with everything else that had happened in the movie. Well worth a look.

When inexperienced criminal Sonny Wortzik (Al Pacino) leads a bank robbery in Brooklyn, things quickly go wrong, and a hostage situation develops. As Sonny and his accomplice, Sal Naturile (John Cazale), try desperately to remain in control, a media circus develops and the FBI arrives, creating even more tension. Gradually, Sonny's surprising motivations behind the robbery are revealed, and his standoff with law enforcement moves toward its inevitable end.

“Aided by a tour de force performance by Al Pacino, and a finely written script by Frank Pierson, Lumet has once again hit the mark.”

“[Pacino] gives an electric performance, charged with a lunatic energy that expertly captures the weird blend of confidence and self-deprecation (if not hatred) that marks the paranoid syndrome.”