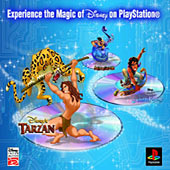 Due to COVID-19, we're unable to accept orders for non-essentials items at this time. Learn more...
Features 'The Emporer's New Groove', 'Aladdin: Nasira's Revenge' and 'Tarzan' in one great value pack! Aladdin
"The magic and adventure of Aladdin has been captured in Disney’s interactive video game Aladdin in Nasira’s Revenge for PSone. Starring all your favourite Aladdin characters, including Genie, mischievous Magic Carpet and mesmerising locations faithfully recreated from the film, each level of Aladdin is a joy to discover and explore."


The Emperor's New Groove
"You take on the role of Kuzco, a young, selfish emperor of a fictional kingdom. In a turn of events, his advisor Yzma usurps his throne and attempts to do him away. However, Kuzco is accidentally transformed into a llama and is sent outside the city to live his days out chewing up whatever llamas chew only to spit it back out. As Kuzco, you must help our llama-fied emperor find the cure to his condition along with reclaiming his title. Through the 30+ levels of gameplay, Kuzco can interact with other animals and even transform to other creatures as he performs a variety of activities such as competing in races and solving puzzles. All those who thought llamas could only chew and spit will be amazed at the antics of this "majestic" animal."