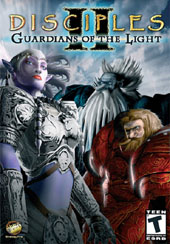 Unavailable
Sorry, this product is not currently available to order
Disciples II: Guardians of the Light is a stand-alone expansion that lets you dive into the fantastical world of Disciples II as either the Empire or the Mountain Clans.

The Empire is decaying from within as self-proclaimed rulers struggle for control of the now vacant throne while a cruel Inquisition sweeps across the human lands, causing rebellion and misery. Meanwhile the Clans, recovering from their near-destruction, begin to reunite their tribes. They have received divine instructions and now seek to uncover an ancient ritual that will let them communicate with their god, Wotan.