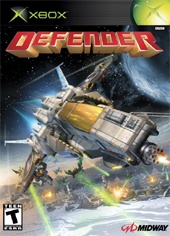 Due to COVID-19, we're unable to accept orders for non-essentials items at this time. Learn more...
Defender gives the player complete control of their ship through a rich variety of worlds that await. Lurking behind every star in the solar system are aliens ready to wipe out the entire human population. The more humans the Defender pilot saves, the more opportunity there is to upgrade their ship with various power-ups including shields, advanced weapons and engine enhancements.