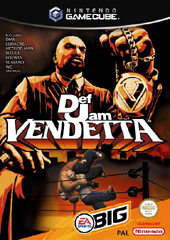 Unavailable
Sorry, this product is not currently available to order
Def Jam VENDETTA will also feature four match types including Single Match so you can play 1-on-1 against the computer or a friend; Tag Team play in which you and a partner can go against another two-person team; Free For All where you can jump in the ring with up to four players with no holds barred, no allies and no mercy; and Handicap where you can prove your skill by taking on two or three opponents at once.

Developed by renowned AKI Corporation and the award-winning EA Canada creative team responsible for NBA STREET, Def Jam VENDETTA takes two cutting-edge interactive gaming teams and ties it all together with creative input from the most sought after hip hop lifestyle company of all time, Def Jam.