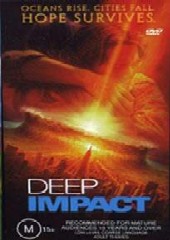 Fourteen-year-old Leo Beiderman did not expect to make an earth-shattering discovery when he joined his high school astronomy club.

He didn't expect to make any discoveries at all; he simply hoped that classmate Sarah Hotchner would discover him. Yet a photograph he takes through his small telescope makes him co-discoverer of Comet Wolf-Beiderman … a comet that scientists determine is on a fatal collision course with the Earth.