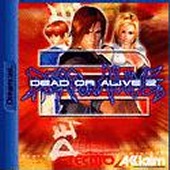 Due to COVID-19, we're unable to accept new orders at this time. Learn more...
Dead or Alive 2 features the most advanced 3D polygon technology available, rendering unsurpassed cinematic quality that will outshine all other fighter games. Grab the controls and put your skills to the test with one or two players. Play through multi-tiered fighting stages set in gorgeous environments. Choose from twelve main characters, each with signature moves and fighting styles, plus secret fighters!

DoA2 follows in the footsteps of its predecessor, which made some relatively impressive steps in the fighting genre. The original DoA used a three-button control system that was very similar to Virtua Fighter 2, but with one major change: the "guard" button was replaced with the "evade" button, which would smack away an opponent's attack. The resulting gameplay resembled a good kung-fu movie, with both aggressors parrying blows back and forth before finally landing a hit. The throwing, striking, and defensive hold systems were balanced like a game of janken, and resulted in fantastic match-ups, even between novice players. This innovation has been carried over to the sequel, with even tighter control, new moves, and a refined evasion system. Instead of just whacking the evade button to reverse any incoming attacks, you need to press evade while holding the stick back, and in a position corresponding to your opponent's attack. This eliminates the endless parrying of the first game when two players would get stuck into a loop, and makes for a much more aggressive game. Parries can also be much more destructive - for example, Tina can launch into a figure-four leg-lock off an opponent's miffed kick.
Release date NZ
August 21st, 2000
Publisher
Acclaim
Product ID
1455339