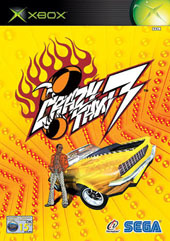 Due to COVID-19, we're unable to accept orders for non-essentials items at this time. Learn more...
Cabbies, fire up your flashy rides, you're going to the Glitter Oasis. The glitzy strip is loaded with high rollers with money to burn and no time to waste, and you know what that means - cha-ching! In Crazy Taxi 3: High Roller for the Xbox video game system from Microsoft, you'll rocket your fares through and around the popular sites of America's Playground with hair-raising shortcuts and maniacal maneuvers to score the big tips. There are four new crazy drivers who attack the roads day and night with the no-fear attitudes you've come to expect from this wild ride series.

Be prepared for hilarious interactions with quirky customers, such as groups of bunnies, can-can dancers, boxers, skateboarders, and more. You can even take a spin through the revamped city streets of the Crazy Taxi "West Coast" course and the "Small Apple" course from Crazy Taxi 2, where you'll find new shortcuts and maneuvers.