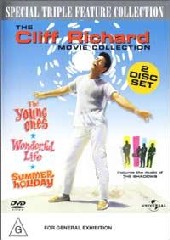 Due to COVID-19, we're unable to accept new orders at this time. Learn more...
The Young Ones When aspiring young pop singer Nicky Black (Cliff Richard) learns that his local youth club is to be demolished by his millionaire tycoon father (Robert Morley), he and his friends decide to stage a variety show to buy the lease. But as they begin jamming the airwaves with pirate radio transmissions of Nicky's songs, all of London becomes obsessed with the identity of this 'mystery singer'. Can one big night of singing and dancing now save the day, or will the battle of wits between father and son bring down the house? Summer Holiday Garage mechanic Don (Cliff Richard) persuades London Transport to loan him an old double-decker bus, which he and his mates transform into a hotel on wheels for a road trip across Europe. But when a beautiful runaway American pop star stows away on board, the boys are off on an international adventure of singing girl groups, chatty French mimes and even a Yugoslavian bullwhip wedding. It's a singing and dancing race against time as Cliff and Co find friends, fun and maybe even love, all on a Summer Holiday! Wonderful Life Cliff Richard & The Shadows are hired to star in a movie shot amid the lush tropical scenery of the Canary Islands. A sunny seaside spectacular filled with romance, excitement and high spirits - not to mention a dozen musical numbers.
Release date NZ
January 20th, 2003
Movie Format
DVD Region
Edition
Aspect Ratio
Language
English
Length (Minutes)
315
Stars
Studio
Universal Pictures
Supported Audio
UPC
3259190900721
Product ID
1461570