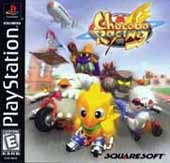 Due to COVID-19, we're unable to accept orders for non-essentials items at this time. Learn more...
Testing out speedy new vehicles, Chocobo and Morg set out to collect pieces of the legendary blue crystals, but soon encounter a variety of characters they must race in order to obtain their crytals. By defeating other Final Fantasy characters, additional abilities and powerful spells become available.

* An arcade-syle racing game which features Chocobo and other familiar Final Fantasy stars.

* Each racer controls a unique vehicle and can select a magical ability, such as Dash or Barrier.

* A wide variety of courses, from a land made of candy to a haunted mansion, plus hidden tracks.

* Tracks vary in difficulty, from basic to twisting turns, where powerslides must be prefected.

* Fast and furious action as players use offensive magic such as fireballs to vex opponents.

* Racer pick up and power up "Magic Stones" for defense, speed or to slow down other racers.

* Three one-player modes plus Vs and Replay modes for two-player head-to-head racing.