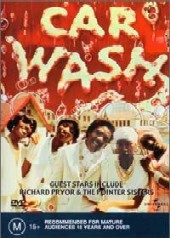 Car Wash is an earthly, irreverent but affectionate look at a typical day in Los Angeles car wash. An ensemble piece which interweaves the lives of employees, customers and passers-by. Car Wash stars a galaxy of gifted actors, most of whom are relatively unknown to movie goers, and spotlights an array of guest stars in vivid cameo roles, inculding George Carlin, “Professor” Irwin Corey, The Pointer Sisters, and Richard Pryor as Daddy Rich, a flamboyant Reverend who preaches the goodness of the dollar.