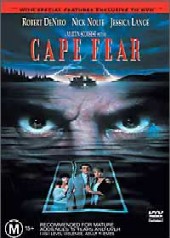 Unavailable
Sorry, this product is not currently available to order
Sam Bowden has always provided for his family's future. But the past is coming back to haunt them. Master filmmaker Martin Scorsese brings heart pounding suspense to this acclaimed thriller, a remake of the original 1962 Cape Fear. Fourteen years after being imprisoned, vicious psychopath Max Cady (Robert De Niro) emerges with a single minded mission, to seek revenge on his attorney Sam Bowden (Nick Nolte). Cady becomes a terrifying presence as he menancingly circles Bowden's increasingly unstable family. Realising he is legally powerless to protect his beautiful wife (Jessica Lange) and his troubled teenage daughter Danielle (Juliette Lewis), Sam resorts to unorthodox measures which lead to an unforgettable showdown on Cape Fear. Visually stunning images (photographed by Oscar-winner Freddie Francis) and brilliant performances from a talented cast highlight this roller coaster ride through relentless psychological torment.